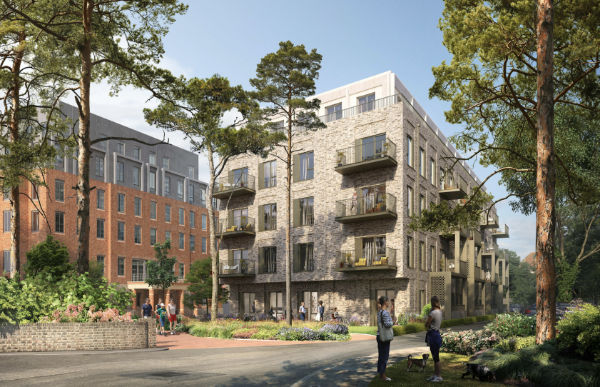 Despite the officer's recommendation to approve this plan, the Planning Committee on 13th October voted against the construction of the 5 storey block of 39 flats as the Second phase of the Benwell House development in Green Street, pictured. (Artist impressions are always designed to look seductive!)

It was a close run thing with the vote: 6 in favour and 7 against. In addition to two well-organised and professional local residents, the Vice-chairman of this Association and Cllr. Kathy Grant (in whose ward the site is situated) also spoke against the application.

The reasons for refusal which have now been published on the Council website are summarised below:

1. The proposed development, by reason of its height, bulk and close proximity to the boundary with the residential properties in Meadows End and Dunnell Close, would result in an unacceptable, overbearing effect and lead to overlooking and loss of privacy to these residential properties, detrimental
to their amenity and contrary to Policy EN1(b) of the Core Strategy and Policies DPD, February 2009, and the National Planning Policy Framework 2021.

2. The proposed development will lead to an unacceptable loss of trees protected by a Tree Preservation Order, which make an important contribution to the urban environment and the landscape quality of the site and surrounding area, contrary to Policies EN1(d), EN7 and EN8(c) of the Core Strategy and Policies DPD, February 2009, and the National Planning Policy Framework 2021.

3. The proposed development by reason of its height, bulk and scale, would result in an unacceptable development which would fail to respect and make a positive contribution to the street scene and character of the area, contrary to Policy EN1(a) of the Core Strategy and Policies DPD, February
2009, and the National Planning Policy Framework 2021.

It's important to state that, at no time, was there an objection to some form of development taking place on this site. Our objections, as described above, would have been made clear from the outset had there been any meaningful public engagement from the outset - a requirement specified by the National Planning Policy Framework.