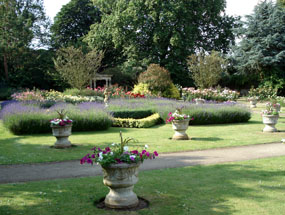 Spelthorne Council is to replace the watering system at Sunbury Walled Garden with a more efficient and economic arrangement. Work should begin in early July and take around two weeks to complete.

Following intermittent failure of the current irrigation system as well as water wastage and consequent footpath damage, the Council is to spend £28,000 on an improved scheme to replace the 20-year old one.

Most residents will be aware that The Walled Garden in Thames Street hosts the Millennium Embroidery building with a cafe open six days a week and is popular with both visitors and locals who come to see the wide variety of plants and trees, one of which, a Persian Lilac, is extremely rare. It also has a knot garden – intricate weaving of dwarf hedges – and a Victorian rose garden. The Richard Stothard Memorial Clematis Collection also has a home here.

It has become obvious over the last few months in particular, that the watering system was failing, not covering the areas required and flooding footpaths. This has meant large amounts of time being spent manually watering and also the potential danger to disabled and wheelchair users who find the waterlogged paths increasingly hazardous to navigate.