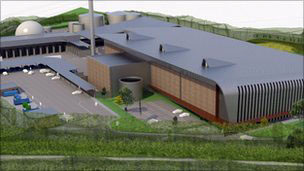 LOSRA has always held the view that the term Eco Park is a deceptively 'greenwash' term cynically designed to hoodwink the local community as to the true intent of what is in fact a very large industrial waste processing plant with a huge chimney stack to disperse greenhouse gases and other pollutants throughout the Borough.

The Advertising Standards Authority have addressed a complaint from a Shepperton resident concerning two newsletters from the Surrey County Council waste contractors, SITA; and have passed it to their investigations department who will deal with it by applying their formal investigations procedure.

In short, this means they are deeming the complaints valid and will now ask SITA UK to comment on the each of the points made. The ASA investigations team will draft a recommendation, which should then be passed to the resident for comment. It will subsequently be referred to ASA Council for adjudication. Once the Council have made a decision the adjudication will be published on their website.

Due to the complexity of the investigation they have warned it is likely to take a long time to complete as SITA UK would (probably) wish to substantiate the claims being challenged, and it is expected they will send a large amount of complicated information to the ASA. Should this happen, the ASA would consult an independent expert.

The following is a summary of the complaints made by the resident against SITA:

SBC, SCC and SITA have named the proposed development an Eco Park.

Point No.1: The incinerator flies in the face of being ‘Eco’ due to the environmentally destructive greenhouse gas and CO2 emissions it will create along with a number of harmful pollutants, named in the SITA Scoping Report of June 2010 as being:-

Point No.2: Trucking in black bin waste from all over Surrey to the north of county is not Eco. Spelthorne is already an Air Quality Management Area (AQMA). Discouraging vehicle movements in the zone would be Eco, not the other way around.

In the SITA October Newsletter they claim that other incinerators are “all operating successfully and emissions are within predicted levels”.

Point No. 1: The proposed incinerator for Shepperton would be untried, untested prototype. As such it cannot be tested until it is built, and they cannot know that it would function successfully until it is in operation.

Point No. 2: Emissions from similarly built incinerators experience frequent breaches. (The ASA were sent a summary of all known breaches that are known to have occurred in the UK and Iceland over the past 12 months, including data on the Dumfries site that incurs a breach, on average, every other day of operation).

SBC, SCC and SITA have consistently referred to the incinerator as a Batch Oxidation System Gasifer.

Point: The Councils and SITA have been consistently dishonest about not calling the gasifier an incinerator. By DEFRA definition and in current EU Legislation, a BOS Gasifier IS an incinerator with gasification being just part of the process.

In the August and October SITA Newsletters, contrasting artistic impressions of the proposed development are shown.

Point: No published artistic impression has revealed the true height of the chimney being proposed. This will create the most negative visual impact and, as it is so singularly significant, it should not be consistently omitted from publications.

Please visit http://www.satep.moonfruit.com/ to keep up with all the latest 'Eco Park' news, to sign the petition and/or make a donation; and to see what action you can take to prevent the construction of this misconceived blight on the local community.