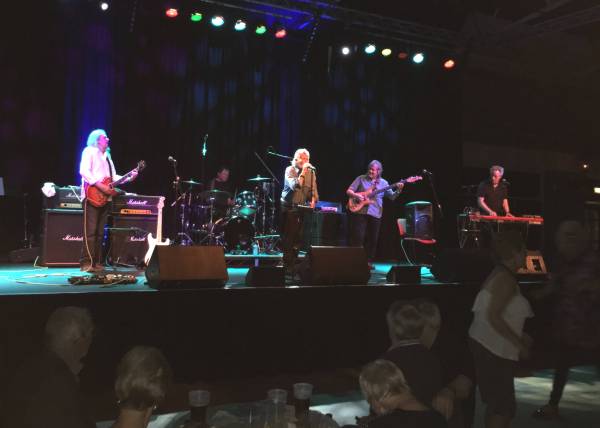 The next Music Night at Sunbury Cricket Club is on Friday 8th April, when the Club at last welcomes back THE NASHVILLE TEENS. The Club had to postpone their usual January gig because of the Omicron outbreak, and so slotted them back in as soon as a suitable date could be found.

THE NASHVILLE TEENS are one of the great names from the ‘60s who had two memorable Top Ten hits in 1964 with “Tobacco Road” and “Google Eye”, and have played storming gigs for the Club over many years, so are delighted to have them back again after the lengthy lock-down break. The line-up features their original lead singer Ray Phillips, who has had an unbroken half-century career with the band, as well as making solo records and performing with other line-ups like the British Invasion All-Stars with members of The Yardbirds, Creation and Downliners Sect. With him in the current Nashville Teens is a line-up of seasoned performers, including on bass Colin Pattenden, member of Manfred Mann’s Earth Band when they had their big hits back in the 70s with Simon Spratley of The Ian Campbell Blues Band on keyboards, Ken Osborn from Levee Camp Moan on guitar and Adrian ‘Spud’ Metcalf on drums. It will be another night of classic ‘60s R&B, featuring in Ray one of the great voices of the beat era. There’s more information at www.Nashville-Teens.com.

Food will be available as usual, so it's hoped you can make it down to get this year’s Music Nights off to a cracking start.

Admission is £10.00 on the door, payable by cash or card. Hot food, prepared by the expert chefs from our resident caterers from the community food redistribution organisation Surplus To Supper, will be available from 7pm.