A new Mayor for Spelthorne 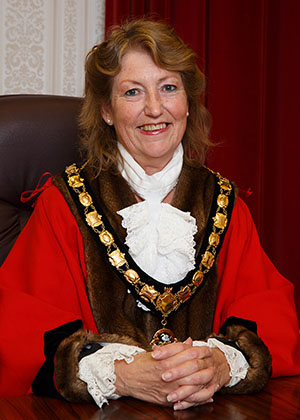 The following press statement has been released by Spelthorne Council:

Cllr Vivienne Leighton was elected as the new Mayor for Spelthorne at the Annual Council Meeting held on Thursday 18 May. Cllr Jean Pinkerton OBE was elected as Deputy Mayor.

Since being first elected to the Council in May 2003, representing Shepperton Town, Cllr Leighton has held a number of Cabinet positions over nine years as well as serving on several internal committees including the Planning and Licensing Committees. She has represented the Council on outside bodies including Surrey Supporting People Commissioning Body, and chaired Spelthorne Neighbourhood Watch.

Cllr Leighton is a retired bank officer and has lived in Spelthorne for 31 years. Living alongside the Thames, the new Mayor has a keen interest in all aspects of river life having also represented Spelthorne on the flooding inquiry in 2003 and the Management Committee of River Thames Alliance since 2006. She was also a school Governor for twelve years.

During her term as Mayor, Cllr Leighton will be supporting the following charities:

Speaking during the meeting, Cllr Leighton said: I hope to appeal to different interests and different parts of the community. I want to celebrate the river and its environment, support the frail and older, involve young people and celebrate their talents … and have some fun on the way.

“I look forward to supporting local events and meeting as many people as I can over the next 12 months.”

Tweet
More in this category: « TW12 Jazz Festival Comes to Sunbury on the 3rd June Summertime Music in the Walled Garden »