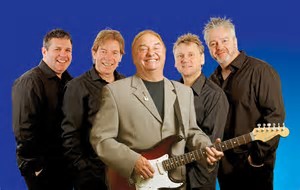 The next Music Night at Sunbury Cricket Club is on Friday 17th June, when the Club welcomes back The 60s All Stars.

They played at the Club's Christmas bash in December, but it coincided with the outbreak of the Omicron Covid variant, and a lot of people decided not to come, which meant that they only had about 40 people for a show that always gets at least double that. The band asked if they could come back during the summer so they could play to a bigger crowd, and the Club was  more than happy to oblige.

THE 60s ALL STARS played at the Club's first ever Music Night back in 2010, and it’s always great to welcome them, as a proper rave-up with a rip-roaring evening of wall-to-wall beat era classics can be guaranteed;  and they have always been one of our most popular attractions.

Their line-up for this gig comprises Alan Lovell of The Swinging Blue Jeans on guitar and vocals, guitarist Pete Orr of Voodoo Room (the Hendrix/Clapton/Cream specialists), with Peter Oakman on bass – he’s an original member of Joe Brown & The Bruvvers and co-wrote their No. 1 “Picture Of You” and is now with the Swinging Blue Jeans - and Mick Avory, original long-time drummer with The Kinks.

Put this one in the diary and get a gang of friends together as a great summer party night is in prospect.

Admission is £10.00 on the door, payable by cash or card. Food is available from 7pm.